Among the women who walk into the gynecological department with complaints of heavy menstrual bleeding, 30% women were found to have uterine fibroids. Uterine fibroids are the most common tumor of the reproductive tract in women. Although often asymptomatic, fibroids can cause severe symptoms, including pain, heavy menstrual bleeding, pelvic pressure, and reproductive problems such as infertility.

Presently patients with uterine fibroids traditionally undergo total abdominal, vaginal or laparoscopic assisted hysterectomies around the world. There is an increasing need for non invasive or less invasive alternatives for uterine fibroids and dysfunctional bleeding. Uterine embolization has emerged as one of the most important of these uterine-sparing options.

Uterine artery embolisation (UAE) is an interventional radiological technique to block the arterial supply to the uterus by placing an angiographic catheter (Small tube) under x-ray guidance into the uterine arteries (Vessels supplying uterus) via a common femoral artery approach and injection of embolic agents (polyvinyl alcohol particles (PVA)) into both uterine arteries until the flow becomes sluggish. The mechanism of UAE’s action is by blocking or reducing uterine blood flow to produce an ischemic injury to the fibroids, causing them to undergo necrosis and shrink.

Very few women are aware of this alternative, which does not want a patient to remain overnight in the hospital. It gives women a better alternative, enables them to return to active life early. The procedure has been used successfully in the West for over two decades. In the United States, according to an estimate, over 14,000 undergo uterine fibroid embolization every year. 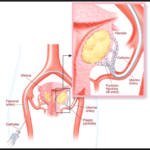